A New Chapter for Camden Town

More than 20 years ago, Australian Jasper Cuppaidge missed a plane at Heathrow airport on his way home from a surfing trip.

Unexpectedly stuck in London, he collected glasses in a local pub for extra cash — and so began a love affair with beer that would result in him founding one of the UK's most prominent modern breweries.

Camden Town Brewery, based in Camden Town, London, has been at the forefront of the British craft-beer movement for years, selling 12 million pints in 2015.

That same year, we joined forces with Jasper, and he has since been planning the next exciting stage in the Camden Town story — a new brewery, just 12 miles north of their home, and costing £25m (US$31m).

After months of hard work, the new brewery officially opened its doors on Saturday 31st July, 2010. The brewery will enable Jasper and the Camden Beer Team to brew and distribute Camden Town's brands — including the flagship German-influenced Hells Lager — to the U.S. and Europe.

But how did Camden Town get here?

Camden Town Brewery officially started production in 2010, although Jasper had been bitten by the brewing bug years before.

One evening in 2006, while driving home through north London, he spotted an old pub up for sale in a great location. He bought it, painted the outside white, and opened the doors of The Horseshoe to the folk of Hampstead.

A year later, Jasper began brewing in The Horseshoe's cellar. His first beer — inspired by his brewing grandfather, and based on one of his original recipes — became so popular that fellow landlords bought it to serve in their own pubs.

In spring of 2010, a brewing team of three was in place, and production had moved to some nearby Victorian railway arches. Jasper's dream of brewing lager — requiring more space than a cellar allowed — became a reality.

Since then, Camden's craft-beer range has grown substantially, and is distributed across Sweden, as well as throughout the UK.

The brewery's Hells Lager now comes in an unfiltered version, hazier and more full-bodied. Additional Camden favorites include an American-hopped Pale Ale, Gentleman's Wit — a wheat beer, brewed with lemon zest and bergamot — and Ink Stout, with nitrogen bubbles to give a smooth finish.

Occasional seasonal beers such as Strawberry Hells Forever — the classic Hells Lager recipe made with hand-picked strawberries — and the smoked lager Flue Faker, which is brewed with German pilsner malt that's smoked over beechwood, are brewed at certain points during the year.

Not content to stop there, Camden Town recently asked people across the UK to submit beer ideas for the chance to brew with Jasper and his team.

The winner was a homebrewer called Charlie, with a rhubarb IPA recipe inspired by his mum's homemade rhubarb fool. After collecting 100 kg of Yorkshire's finest rhubarb, Foolish was brewed for this year's Craft Beer Rising festival in London, raising money for MSF: Doctors Without Borders. 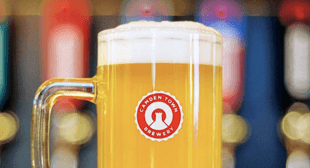 Where is Camden Town based?

Under eight big railway arches in Camden since 2010.