The climate is the first thing you'll notice when setting foot on Hawaiian soil. It's impossible to ignore — mostly because Kona International Airport doesn't have a roof.

In fact, the open-air main terminal looks more like a tropical summer camp than a functioning transportation hub. And while Hawaii's climate sure does allow for some quirky public constructions, it's also great for brewing beer.

"The temperature is pretty stable year-round in Hawaii, which means no large fluctuations in malt silo temperature," explains Sandi Shriver, Brewery Operations Manager for Kona Brewing Company. "Thus, adjusting temperature to achieve targeted mash-in temperature isn't as big of a deal as it might be for brewers in more varying climates."

The fact that Kona's brewery isn't temperature controlled not only provides for greater brewing consistency — it benefits the brand financially, too. "We save on electricity since we don't have to heat the facility during the winter months," Sandi explains. And because water rarely dips below 72 degrees Fahrenheit throughout the year, the brewery spends less heating it.

But the best reason to brew beer in Hawaii is the available selection of fresh, delicious adjunct ingredients. Cacao nibs go into Kona Brewing's Black Sand Porter, while vanilla beans are used to brew Vanilla Thrilla, an imperial vanilla stout. Passion fruit, oranges and guava (known collectively as POG throughout the island) inspired their Hanalei IPA. Island fruits such as coconut, pineapple, or the exotic Jabuticaba (used in a unique oatmeal stout) are employed frequently, and even spices like cinnamon or plants such as lemongrass and lavender make their way into beers from time to time. By obtaining these fresh ingredients from farm collectives, Kona can craft a seemingly endless list of new beer recipes — many of which would be prohibitively expensive to replicate anywhere else in the world.

And yet, while the sexiest and most innovative of these beers come out of Kona's original location on the Big Island, the brand brews the bulk of its commercially available beers on the mainland. It's no secret, either — Kona had been contract brewing with Widmer Brothers Brewery in Portland, OR, for decades until 2010, when Widmer's parent company, Craft Brew Alliance (of which AB InBev owns a minority interest), purchased the brewery outright. While a small team of twelve brews around 13,000 barrels per year in Kona, HI, for local consumption, the Portland brewery serves the majority of the world. After all, shipping beer such distances is costly, harmful to the environment, and punishing to a product meant to be enjoyed fresh.

The best reason to brew beer in Hawaii is the available selection of fresh, delicious adjunct ingredients.

Exportation isn't the only challenge posed by brewing beer 2,400 miles from the mainland — imports are equally challenging. "There is less of a demand for sanitary stainless welding on the Big Island," Sandi reveals, "so our two best options are to bring [welders] over from a neighboring island, or contract an experienced welder from the Pacific Northwest region." And although most breweries employ dried, pelletized hops, Kona has no choice but to do so, as it's nearly impossible to get the fresh stuff to the island in less than the required 48 hours.

In the face of such environmental challenges, Kona has gotten creative with their sustainability efforts. Six years ago, the brewery introduced a reverse osmosis process to treat hard water. And though it wasn't instituted for comparison's sake, it does help maintain consistency with their sister brewery on the mainland.

Now, Kona is building a new brewery (due to open within the next two years) that will increase potential island output by nearly tenfold while employing state-of-the-art technological advancements in sustainability. Following the lead of another remotely located American brewery, Alaskan Brewing, Kona will utilize carbon dioxide reclamation technology (in Hawaii, CO2 goes for six times what it costs on the mainland). And to reduce waste like Alaskan does, Kona will install a High Efficiency Brewing System (or HEBS) that includes a mash filter press: an accordion-like machine that wrings hard-to-access wort out of wet grain. The sawdust-like dry byproduct will be used as feed for cows that colleagues will someday get to eat. Kona will even clean with recycled brewing water, and power 50 percent of the new brewery with solar panels.

Given how important environmental issues are to Kona Brewing, the brand is exceptionally intertwined with the local culture. In particular, proceeds from the Makana Series — four beers inspired by the four elements—- helped fundraise more than $100,000 for four Hawaiian nonprofit organizations:

Of course, distribution of these incredibly tasty beers has been limited to Hawaii. In fact, the brewery only kegs beer at its island facility; bottling is restricted to the mainland, as glass and shipping are too costly for Kona — and the environment. While Kona's new facility will begin canning beer, those cans will only be sold within the state of Hawaii.

Still, this is exciting news for Hawaiian drinkers who, like any who imbibe, yearn for fresh beer that can be enjoyed anytime, any place. Considering how difficult fresh imports and mainland brews are to come by in Hawaii, Kona has done an impressive job bringing these people together and quenching their thirst — whether at the brewery or at various bars and pubs throughout the island, such as the popular Kona Tap Room at the Hilton Waikoloa Village hotel. 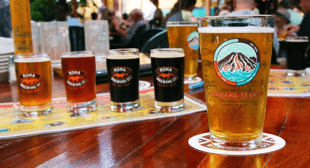 Where is Kona based?