Meg Gill is no stranger to cameras. She’s been pressworthy since 2011, when she co-founded Golden Road Brewing in a then beer-starved Los Angeles, California. And what’s more, she did it at age 25 and with two X chromosomes, earning her the title of “Youngest Female Brewery Owner in the World” in publications like Forbes’ 30 Under 30 in 2014.

But when we meet on a breezy Manhattan rooftop above Anheuser-Busch ’s marketing headquarters in Chelsea, she seems simultaneously at home and out of place. With her hair pulled back in a low ponytail, her eyes hidden behind black Ray-Bans, and her torso wrapped in a thick black sweater, she looks more New York than LA, and not like the Meg Gill I’ve seen in photos. Then again, it’s a sunny day, she’s sitting in an appropriately cushioned rooftop lounge chair, and on the patio beside her is a cooler of her company’s beer, alluringly ajar.

She cracks one open and asks if I drink beer. I assure her that I certainly do, and as we sip on Mango Cart, a beer inspired by the fruit sellers on the beaches of Los Angeles, I begin to see the Meg Gill I’ve read about; the one made her debut on screen as host of Viceland’s new beer show, Beerland.

As we talk, I begin to piece together that this is, in fact, the woman who launched LA’s first production brewery; who, four years later, sold it to big beer’s AB InBev (hence our meeting on this rooftop); and who is starring in her own beer show that spins the spotlight away from professional brewers altogether, instead illuminating the lives of the nation’s best -- and weirdest -- homebrewers.

She is, in a phrase, no bullshit. I find this more striking than her reputation as a female brewery-owning anomaly, and even more than her big, beautiful, blonde hair.

“It’s amazing that I haven’t done a show until now, actually,” says Gill, who says she has been approached by studios and producers over the years. “Being in LA, it’s like a cliché [...] I just wasn’t sure about the timing, or if I could do a show and manage a business.”

When Gill tentatively took the concept of hosting a beer show to Felipe Szpigel, president of Anheuser-Busch’s High End division (of which Golden Road is a partner), she was surprised to be met with encouragement. “I was nervous, like, ‘he’s gonna think I don’t want to do my job, like I want to do a TV show instead,” says Gill, whose candid language is unchanged on- and off-screen. But Szpigel, like Gill, saw an opportunity in Beerland. “[He said], you have to run the business and do the show.”

Next in her series of strategic moves was partnering with Vice Media, which she felt would give the series a less conservative, more “authentic” lens. “I would never do a reality show or some mainstream, show,” Gill said at a recent screening in New York City. Beerland, she says, offers “a very raw lens on beer,” thanks to Vice’s millennial-focused and unfiltered point of view. This stance resonates with the strong-willed Gill, who says she doesn’t want the show to focus on her, but on the “awesome stories” of the “crazy characters” woven into the country’s homebrewing fabric.

Season 1 of the series -- “part travel show, part beer culture show” -- followed Gill through Santa Fe, New York, San Francisco, Denver, and Honolulu, where she metand critiqued a handful of homebrewers, choosing one in each city to move on to a final competition. In the season’s sixth and final episode, at the original Golden Road pub in Los Angeles, a panel of judges determined the best of the five beers, which wasthen brewed, canned, and distributed by Golden Road.

“It wasn’t a requirement […] but pretty much everybody who won really wanted to start a brewery,” Gill tells me. “[It was] kind of one of my selection criteria. It wasn’t planned that way, but [the winners] ended up being the people who wanted it the most, or who it would impact the most.”

In addition to its Los Angeles brewpub and production facility, Golden Road recently opened  a larger, innovation-focused brewery and brewpub in Anaheim, operating additional locations in LA’s Grand Central Market and LAX, and has recently expanded into Sacramento and Oakland e. Given Golden Road’s rapid growth and expansion, one might suspect Beerland of being a convenient vessel for exploring new markets, or even poaching local talent from the nation’s homebrewing communities. But Gill assures me that locations were “based on where we found the best homebrewers, and had very little to do with Golden Road expansion or marketing. It was just about finding the best homebrewers with crazy stories.”

The eccentricities of each aspiring brewer is certainly evident off the bat (and even in the Beerland trailer), as well as throughout Santa Fe (episode 1), in which we become acquainted with a colorful trio of New Mexico beer community members. But Gill is not without her own crazy stories, we suspect, and her wild side reveals itself everywhere from her appearance, to her past, to her interactions with brewers in the show.

And in her hand, more often than not, is a can of one of Golden Road’s beers, which have names like “Wolf Among the Weeds” (a translation of the Latin name for hops, Humulus Lupulus, resonating with Gill’s Classics degree), “Wolf Mother” (a triple version of the aforementioned IPA), and “Get Up Offa That Brown,” a brown ale.

Later, I’ll also learn that her unique demeanor is a thread throughout the show. As host, she is straightforward almost to the point of being awkward, at times barely finishing the first sip of a beer before abruptly informing its maker of its flaws (most often, that it’s too malty for her LA palate). Furthermore, between sips and criticisms (and occasionally, compliments), more “dudes,” “damns” and California-drawled “mans” leave her mouth than beer making terms.

However, each episode includes a “star ingredient section,” a 60-second segment in which she explains a particular aspect of a beer or brewing process for educational purposes. In the first episode, for example, she clues the audience in on homebrewer Andy’s unusual strain of hops, Neomexicanus. “The beer was so unique because it was not only [brewed with] this great hop you can only get in New Mexico, it was a wild hop from his buddy’s backyard,” she tells me.

Whether she’s shooting the breeze about brewing techniques or shooting guns with Cale, the bona fide cowboy homebrewing in a saloon, Gill -- and Beerland -- can be expected to create a multifaceted portrait of the American homebrewing community, as told through a series of entertaining glimpses into the lives of its many aspiring brewers. 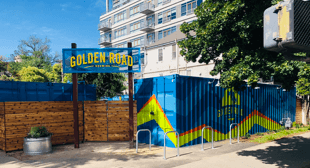 Who started the Brewery?

Where is Golden Road Based?